Coincidence? I don’t think so!

It was about 6:30 in the morning when she arrived. I opened the door and there she was. My Asja. My very 1st very best friend from the school bench. She arrived from India, where she now lived with her husband and their little baby daughter. We didn’t see each other for years. 4, 5, 6? I didn’t count anymore! Too many for sure. There were no words to describe my happiness and excitement about her staying at my place in Amsterdam for a week. But when I opened my apartment’s door to let her in, I almost crashed down and cried. I never told her this, but she scared me to death that morning. Asja looked almost like a ghost. Very skinny, super pale, very fragile, visibly weak, lost. Her enormous baggage looked so big next to her whilst she appeared so small and weak. It was such a ridiculous contrast that made her appear even more lost somehow.

We sat down in the kitchen and she immediately started talking  about her life in India, about her relationship and what was going wrong. And before I even had the time to realise what was going on and to start asking questions, she hit me with a very bad news – doctors said she had MS. But right after sharing this information with me she pointed out that she is not going to accept that diagnose and that she is going to heal herself. I went to the bathroom as an excuse to be by myself for a moment and to calm me down so I don’t start crying in front of her. I didn’t want to appear weak, as she was strong and determined.

Day by day I understood that the diagnose, her condition was just a physical thing. Asja had a mental strength, almost inhuman strength. She would stand up every morning really early to do her yoga, to write things down in her diary and to make herself a delicious raw food breakfast before I was even able to open my eyes. I was asking myself where this commitment came from? What kind of superpowers she had? And where, for God’s sake, she gets this strength from? And she would share bit by bit. And I would listen and learn.

What I didn’t know back then is that Asja’s determination to heal her self and the deep knowledge that she CAN heal herself both came from regular yoga practice. While living in Kazakhstan several years ago she already attended Kundalini yoga classes. Back then life was perfect. Freshly in love and healthy she considered Kundalini yoga classes more a healthy recreation than a necessity. Life was pretty much great. But soon everything changed. She was in India, with a new born baby, a marriage which was falling apart, without her loved ones and a terrifying diagnose. In a city with 22 Million people, she found Soorya Kaur, a raw food expert and a Kundalini yoga teacher. Asja came to her because she wanted to work on her diet and ended up following Soorya’s yoga classes. Soorya would teach in the house of Yogi Bhajan, in his former living room. In that house Asja found all the help she needed.

There was one particular class which literarily changed her life. After that class, she put her shoes on and said to herself – if I was able to do this, I can do whatever I want! She left, sorted herself, took control over her life again, glued her broken heart together. Her health just followed. The whole process took about two years, but it started there at this particular class in Yogi Bhajan’s living room in New Delhi.

After knowing this all I thought, it would be great to go with her to a Yoga class I was following back then. I didn’t even know what kind of yoga it was: Vinyasa? Hatha? Ashtanga? Who cared? I wouldn’t know the difference back then. I thought yoga = yoga. We came out of that class and she looked at me with a huge question mark above her head, laughing: “Sta je ovo bilo, draga?/ What was that, my dear?” 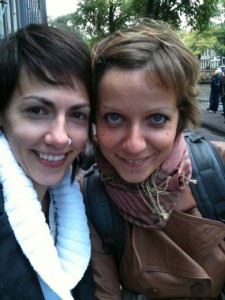 Back on the sofa, she googled all Kundalini yoga schools in Amsterdam for me. A week after she went back to India, on a Wednesday evening, I attended my very first Kundalini yoga class. I came out hypnotised. I couldn’t believed how good I felt. And I got hooked. 5 years later I am teaching this wonderful technique myself. Every Wednesday evening.

Asja doesn’t have MS anymore. It’s not a miracle, neither God’s will. It’s purely her strong will, discipline and determination to improve from day to day. She is now helping others heal themselves, using reflexology and everything else she learned on her journey to healthy, happy and fulfilled life. She also organizes reflexology courses in Sarajevo, Bosnia, where her own teachers come to train new therapists. With this, another dream came true…